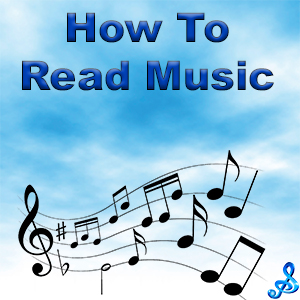 How To Read Music

Learning to read the notated language of music is not really any harder than learning any other technical jargon and skills. Written music has been developed over thousands of years and even the current form of music we read today has been around for over 300 years.   Written music will tell its reader things like pitch, note duration and timing, whether its loud or quiet, flowing or choppy.  Music is read left to right across the page.

To read music you will start with a stave (aka staff): Five horizontal lines with a curly symbol called a clef to indicate its pitch.

The Notes Of The Treble Clef

The Notes Of The Bass Clef

The reason that there are two clefs is that most instruments using the bass clef usually have a lower pitch (sound) and often play low notes. If they were to use the treble clef the notes would appear so far below the stave it would be hard to read.

Time signature is an indication of rhythm following a clef, generally shown as a fraction. The number on top is the number of notes per measure, and the bottom number is what kind of note.
Lets use the most popular time signature, 4/4 as an example..  This means there are 4 somethings per measure.  Music notes are shown as different symbols to show the different time measures.  So our 4/4 time signature means there are four quarter notes (known as crotchets) in each bar

Our basic 4/4 time signature using 4 crotchet beats to the bar will have a walking pace feel to it.  By mixing up the different note values and by using rests (where no music plays for set beats), you can create an infinite amount of rhythms.

Tempo is the speed of the underlying beat.  Tempo is measured in BPM (beats per minute).  60BPM is one beat every second.  Sometimes the tempo is written at the beginning of the music and is often called the metronome mark. In classical music Italian musical terms are often used to describe tempo. A few are described below:
Largo – slowly and broadly
Andante – slowish – a walking pace
Moderato – at moderate speed
Allegro – fast
Presto – very quick

The key signature is the collection of sharps ♯ or flats ♭that you can see at the beginning of a staff.  Key Signatures tell us what scale the piece is made up from, so we know which notes to raise or lower to get the right “colour” of that particular tonality, or key. They tell us what notes are either raised (♯ ) or lowered (♭) throughout the piece.   The main reason for using a signature and not simply accidentals, is that it makes the music looks cleaner and easier to read.

What Is the Difference Between Major and Minor?

If you’ve spent any time studying a few scales you should know many scales contain seven different notes. For example, the major scale contains a Root, 2nd, 3rd, 4th, 5th, 6th, and 7th.   All of these scales and chords contain that important note the 3rd in them. A minor 3rd is one interval note (semi-tone) lower than a major 3rd.

How To Figure Out if a Key is in Major or Minor?

This is because most pieces finish on a note/chord that sounds like ‘home’ (tonic).

All notes have a certain time value, which determines how long a pitch should be held. Sometimes, however, you want to add to the value of a note to create syncopation or other interest in your musical piece. You can extend a note’s value in written music using dots and ties:

Music is made up of many different things called elements. They are the building bricks of music. When you compose a piece of music you use the elements of music to build it, just like a builder uses bricks to build a house. When you listen to a piece of music, you’ll notice that it has several different characteristics; it may be soft or loud, slow or fast, combine different instruments and have a regular rhythmic pattern.

Timbre – the quality of a note, determined by its overtones.  Brass instruments sound different to string instruments, even when playing the same pitched note.

Pitch – the primary frequency of a note

Dynamics – the degree of loudness of a note

Texture – the thickness and feel of a note. How many sounds

Duration – the length of time a note is held

Some dynamic symbols you may see on sheet music

This site uses Akismet to reduce spam. Learn how your comment data is processed.